After American Rapper Jay-z dropping out of high school to risk his life dealing drugs, Jay-z changed course. He still wanted all the best things the world could offer, but he decided he was going to get it all through music, not drugs. Today, with a personal net worth of $1.3 billion, and an entrepreneurial career that any Harvard MBA would kill for, Jay-Z has certainly made those dreams come true. And then some. This is his absolutely incredible rags to riches story. By Buyinza.com

by Buyinza.com
in News, Who is Who & Celebrity Profiles
0

It is no secret that prior to becoming extremely and rich and famous rap star, many hip hop artists are forced to endure some very difficult life circumstances. Getting shot, beat up, arrested, abused and all manner of unpleasantness seems to be a prerequisite before launching a rap music career. This was definitely the case for rapper artist turned producer, designer, entrepreneur and media mogul, Jay-Z.

After American Rapper Jay-z dropping out of high school to risk his life dealing drugs, Jay-z changed course. He still wanted all the best things the world could offer, but he decided he was going to get it all through music, not drugs. Today, with a personal net worth of $1.3 billion, and an entrepreneurial career that any Harvard MBA would kill for, Jay-Z has certainly made those dreams come true. And then some. This is his absolutely incredible rags to riches story. By Buyinza.com

Jay-Z, formerly known as Shawn Carter, grew up in Bedford-Stuyvesant, a predominantly African-American neighborhood in Brooklyn, New York.  He was one of four children, and his mother raised the family alone after his father chose to leave them all and disappear.

Jay grew up in the Marcy Houses, and moved from school to school. The Marcy Houses were so notoriously dangerous that soon after Jay graduated from the high school, the entire neighborhood had to be shut down.

At one high school, Jay’s classmates included two young men who would go on to become The Notorious B.I.G. and Busta Rhymes.  Jay eventually ended up at Trenton Central High School in Trenton, New Jersey, but never actually graduated.  Like many young men without purpose, he fell in to drug dealing, peddling crack cocaine. He was shot at multiple times.  He also shot his own brother in the shoulder when he was twelve, after his sibling attempted to steal from him.  Jay’s formative years were not particularly comfy or cozy.

Shawn Carter was always interested in music, regularly waking the rest of the family at night, as he would beat out drum patterns on the kitchen table.  His mother gave him a boom box for his birthday, and he immediately began writing lyrics and freestyling.  His entire focus shifted, and by the late 80s, Jay began to make a name for himself around the neighborhood.

He was taken under the wing of Jaz-O, and invited to appear on some of Jaz-O’s recordings in the late 80s and early 90s.  In an effort to build his name and reputation, and attract record label attention, he regularly battled with LL Cool J, winning several of their freestyle match-ups.  His early efforts paid off when Jay was featured on Big Daddy Kane’s track, “Show and Prove”.  This led to go on tour with Big Daddy Kane, serving as a freestyling “hype man” for the artist in between sets.  After guest appearances on tracks for Big L and Mic Geronimo, Jay finally released his own single, “In My Lifetime”.  Even with all the early momentum, record label offers were not forthcoming.

Jay didn’t fit the mold of fellow typical Brooklyn rappers who wore gold teeth and sang exclusively about dealing drugs and killing people. In 1995, he co-created Roc-A-Fella Records with Damon Dash. The name was a play on oil tycoon John D. Rockefeller, the richest American of all time who died with an inflation adjusted net worth of $340 billion. The name was also a nod to a famous Brooklyn drug dealer named Rocafella who Jay-Z idolized as a young hustler. That Rocafella is the one who died of AIDS and is immortalized in the NAS song “Ether” (“Rocafella died of AIDS, that was the end of his chapter And that’s the guy y’all chose to name your company after?”).

Damon wanted Jay to film a music video as fast as possible but there was just one problem. Roc-A-Fella Records had no money. To raise cash, Damon sought an investment from a well connected street hustler named Kareem “Biggs” Burke. Damon took 100% of Burke’s $16,000 investment and poured it into producing a music video for Jay’s song “In My Lifetime” on the Caribbean island of St. Thomas. Burke also arranged for Jay and Damon to have access to a wealthy local kingpin’s mansion and speed boat for the video

The gamble paid off and soon Roc-A-Fella record’s only artist was getting courted by all the major record companies. Unfortunately, none of the major labels would agree to one of Damon’s outrageous demands. Damon Dash demanded that Roc-A-Fella would maintain ownership of Jay-Z’s master recordings. Owning the master would turn out to be a brilliant financial decision as Jay-Z’s back catalogue still sells millions of units, even almost 20 years later. Only one record company was willing to acquiesce to such insane demands, a little known label called Freeze Records. As fate would have it, shortly after signing Jay-Z, Freeze Records was sold for scraps to Russell Simmons and Lyor Cohen’s Def Jam Records after experiencing severe financial setbacks.

Roc-A-Fella Records Rises To The Top

The ensuing 54-city “Hard Knock Life” music tour generated $20 million in profits. Simultaneously, Damon and Jay had launched a clothing line called “Rocawear” and a brand of vodka called “Armadale Vodka”. Rocawear and Armadale’s sales exploded every time the products appeared in one of Jay’s videos. In the year 2000 Rocawear’s sales generated revenue of $50 million per year. Within a few years, Rocawear would expand to five different clothing and shoe lines and would generate $350 – $450 million per year in annual sales.

The release of his third studio album, “Vol. 2… Hard Knock Life”, shot him to international superstardom. He immediately released, “Vol. 3… Life and Times of S. Carter”, and it too sold well, with fans buying up nearly 3 million copies.  Around this time, Jay was accused of stabbing a record executive for bootlegging copies of his album.  He plead “not guilty” to the stabbing charges, and had video to prove it, but he did plead “guilty” to a related misdemeanor charge.  The incident seemed to galvanize the newly minted superstar and he began to actively take more positive control of his life and career.

In 2000, Jay released his fourth studio album, “The Dynasty: Roc La Familia”.  The album is most notable for introducing a host of now famous producers, including The Neptunes, Just Blaze, Kanye West, and Bink.  His next two albums, “The Blueprint” and “The Blueprint2: The Gift & the Curse” debuted at #1 on the Billboard 200.  “The Blueprint” featured a relatively new rapper named, Eminem, and was almost entirely produced by Kanye West.  After touring extensively, and releasing his eight studio album, “The Black Album”, followed immediately by a collaboration with R. Kelly called, “The Best of Both Worlds”, Jay shocked the world when he decided to retire.  His “retirement”, which commenced in 2003, included releasing several collaborative albums and executive producing a number of other albums.  In 2004, he became the President of Def Jam Records, and subsequently took over full ownership of Roc-A-Fella Records.  In 2005, he publicly laid to rest a number of hip hop rivalries that had created tensions over the years, seemingly uniting a number of powerful hip hop artists. 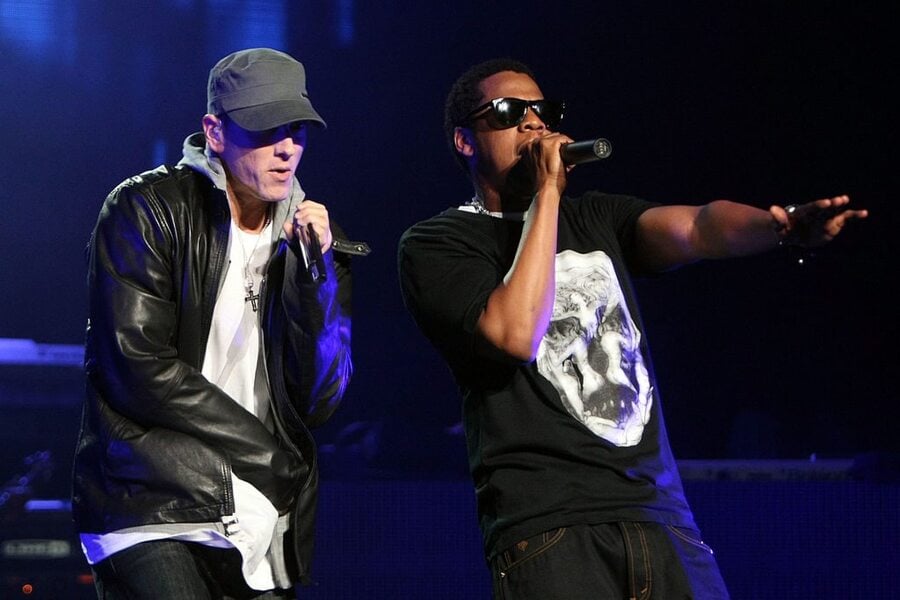 In a calculated move, Jay released a new album in 2006, “Kingdom Come”.  The album went on to sell two million copies.  His next album, “American Gangster”, sold a million copies.  He left Def Jam in early 2008, and spent the next year touring extensively, including becoming the first hip hop artist to headline the prestigious Glastonbury Festival.  From there, he launched his own record label, Roc Nation, which was also designed to serve as a management agency and a publishing company.  The Jay-Z empire had really started to take shape.  The release of his next album, “The Blueprint 3” in 2009, netted him another #1 on the Billboard 200, and his tour featured a young unknown named, Rihanna.

Since then, Jay-Z’s life has been a whirlwind of producing, touring, curating, and recording.

In addition to his music career, J is also the co-brand director for Budweiser Select, executive producer of the basketball video game NBA 2K13, and launched Roc Nation Sports.  He also briefly owned a percentage of the NBA’s Brooklyn Nets and published a memoir titled “Decoded”.

In 2014, Jay became the majority owner in champagne company Armand de Brignac. He had previously been a paid endorser of the brand, but ultimately decided to buy the company out completely. In February 2021 he sold Armand de Brignac to luxury goods conglomerate LVMH for $640 million.

That same month he sold his music streaming company Tidal to payments company Square for $300 million.

At age 51 and with a net worth of $1.3 billion, this high school drop-out who once shot his brother and sold drugs has certainty made his mark on the world. And despite a handful of mini retirements, Jay-Z shows absolutely no signs of slowing down any time soon.

President Museveni was wrong on keeping places of worship closed, Maybe he is possessed by demons

President Museveni was wrong on keeping places of worship closed, Maybe he is possessed by demons