Dangote Group operate the largest sugar refinery, and the third largest in the world. They can produce 800,000 tons of sugar per year. In addition to sugar, the Dangote Group also owns salt factories and flour mills. They also are a major importer of rice, fish, pasta, cement, and fertilizer into Nigeria.

Early Life: Alhaji Aliko Dangote was born on April 10, 1957, in Kano, Nigeria. His parents are Mohammed Dangote and Mariya Sanusi Dantata. He is an ethnic Hausa Muslim, and is from a prominent and wealthy Muslim family. His great-grandfather is Alhaji Alhassan Dantata, who was the richest West African at the time of his death in 1955. His maternal grandfather, Sanusi Dantata, was the former director of the Nigerian branch of Shell B.P., and also the founder of the company Sanusi Dantata and Sons Limited.

As a child, Dangote showed signs of his innate entrepreneurial spirit when he launched a business buying candy in bulk to sell to his elementary school classmates for a hefty profit. After receiving education at the Sheikh Ali Kumasi Madrasa, and Capital High School, Kano, he graduated from the Government College, Birnin Kudu. He attended Al-Azhar University in Egypt where he earned a degree in business. After graduating from college in the early 1970s, the 21 year old Dangote returned to Nigeria. Upon his return, a powerful uncle secured him a highly lucrative government contract to manufacture cement plus a $5000 loan to launch a small business. Having spent time in Brazil and witnessing that country’s rise to an industrial superpower, he was inspired to seek the same opportunities in Nigeria.

Career: In 1977, Dangote launched the Dangote Group, and over the last 35 years, the company has grown at an extraordinarily fast pace. In 2013, The Dangote Group earned just under $21 billion in revenue. It is the largest industrial conglomerate in West Africa, and employs more than 11,000 people.

It originally started as a small trading firm headquartered in Lagos, Nigeria, but now has operations all over Africa, including in countries like Benin, Ghana, Zambia, and Togo. Its areas of operation include food processing, cement manufacturing, freight, sugar refinement, etc. Far from its humble origins, the Group actually consists of multiple companies and subsidiaries, including Dangote Sugar Refinery, Dangote Cement, and Dangote Flour, to name a few.

They are actually the main player in the Nigerian sugar market, and are the supplier for most of the country’s soft drink companies, breweries, and confectioners; the Dangote Group makes up about 70 percent of the market. Across the entire continent of Africa, the

Dangote Group operate the largest sugar refinery, and the third largest in the world. They can produce 800,000 tons of sugar per year. In addition to sugar, the Dangote Group also owns salt factories and flour mills. They also are a major importer of rice, fish, pasta, cement, and fertilizer into Nigeria. On the other hand, they export products like cotton, cashew nuts, sesame seeds, and cocoa. Their other investments are in areas including real estate, banking, transport, textiles, oil and gas, and telecommunications. About 80% of the conglomerate’s revenue reportedly comes from Dangote Cement, which is said to produce 44 million metric tons of cement annually. 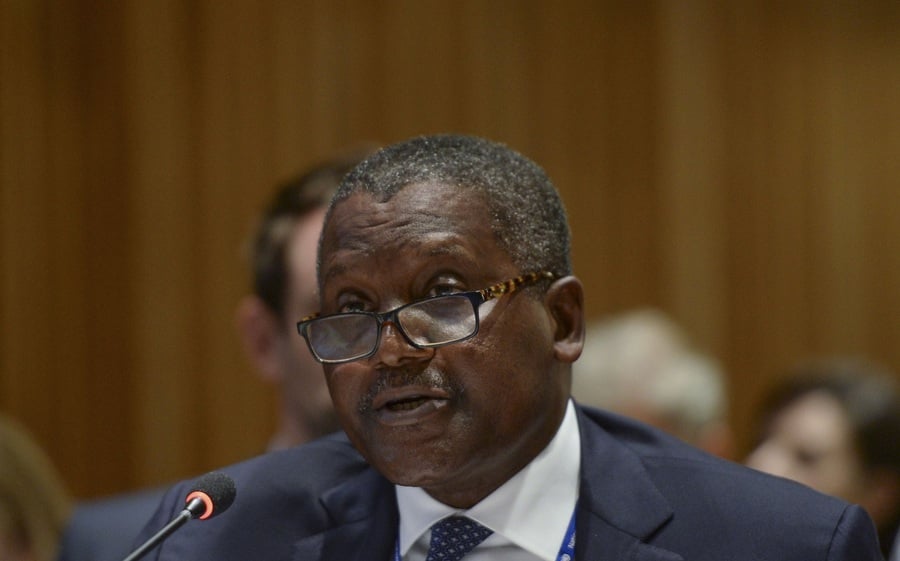 Other Work and Philanthropy: Dangote has been a prominent donor in Nigerian politics. He helped fund Olusegun Obasanjo’s re-election campaign in 2003, giving over N200 million (US $2 million) to the effort. Other politics-related donations he has made, in particular related to members of the ruling PDP party, include a N50 million (US $500,000) contribution to the National Mosque with the backing of “Friend of Obasanjo and Atiku”. These donations have been highly controversial, sparking concerns over corruption and government relations with private industry leaders.

Dangote has also been highly involved in many philanthropic efforts. He has been a major contributor to public health issues and campaigns; he donated N150 million (US $75,000) to combat the spread of ebola in 2014, and N200 million in March 2020 to combat the spread of Covid-19 coronavirus in Nigeria. He has also collaborated with the Bill and Melinda Gates Foundation to target polio, among other issues, and is on the Clinton Health Access Initiative’s Board of Directors. He is a board member of the Corporate Council on Africa, as well as a member of the Global Education First Initiative’s steering committee, which is an initiative under the United Nations Secretary-General. Additionally, he established his own Aliko Dangote Foundation in March 2014, which focuses on issues of health, education, and economic empowerment.

Personal Life: Dangote lives in Lagos. He has been married twice, and divorced twice. He has three daughters from his marriages, including Halima Aliko Dangote, as well as one adopted son.